BACKSTORY (1955—1993): On July 20, 1955, Disneyland debuted the Tomorrowland Boats in the lagoon that would eventually be home to the Submarines. This attraction was a snoozer; only 542 guests rode them at opening. Compared to the other unique and fun attractions, the slow-moving and unexceptional Boats just couldn’t compete. On August 16, 1955, they were rechristened The Phantom Boats and redesigned with tailfins that were apparently a mechanical nightmare. They quickly got a bad reputation for stranding guests in the lagoon.

There were a total of 14 gas-powered fiberglass marvels painted in bright colors, designed by Bruce Bushman. Poor mechanical design caused the  motors to constantly overheat; every night the boats had to be rescued and repaired. “Pilots” for the boats were added to help the situation, but despite all their efforts, the Phantom Boats received the dubious distinction of being the first permanent Disneyland attraction to be closed. By the end of 1955, they were taken out of commission. There was a brief attempt to change the attraction to a Florida Everglades type “Airboat” (guests could even see signage proclaiming their June 2, 1956 opening). The new boat was built and even tested, but ultimately vetoed, so as a last resort, the Phantom Boats came back for one more chug around the lagoon in the summer of 1956.

1957 marked the debut of “The Motor Boat Cruise” in a nearby lagoon. This very sedate “B” Ticket attraction took away any control that guests had over the boats by putting them on a track. No steering or acceleration. Guests leisurely road around the Fantasyland/Tomorrowland lagoon while the Viewliner, Autopia, Monorail, and PeopleMover “sped” by (depending upon what year you were riding the boats of course!). Cast members operating the attraction wore cute sailor outfits. The next transformation occurred in 1991 when it was rethemed “The Motor Boat Cruise to Gummi Glen.” Plywood characters from Disney’s animated “Gummi Bears” TV show made Gummi Berry juice along the waterway. Mercifully, this snoozer of an attraction was finally removed for good in January 1993 when Mickey’s Toontown was constructed. The pencil sharpeners  had to choose between one or the other, and the Motor Boat Cruise lost. Today, this area is now known as the Fantasia Gardens.

John Waite, Disneyland Resort Alumni, recently contacted me and was kind enough to share his memories of The Motor Boat Cruise attraction. John came to California in October 1955 and worked at the Disney Studio from January 1956 until Van France got him a job working for Milt Albright at the opening of Holidayland. Here is his story:

The Motor Boat Cruise – what memories!  Back in 1957 I was a ride operator on the original Motor Boat Cruise.  If you refer to old photos of Tomorrowland you will see the Motor Boat Cruise with the Viewliner train running along one side with the Midget Autopia across the way.  At that time the ride had a curved covered (for the guests) loading area.  The ride operators wore white sailor pants, white and blue stripped tee shirt and white captain’s cap.  It was summer and very hot.  There were two courses for the boats as in the later version that narrowed down to one channel through the loading area.  The track system was different in that it consisted of two pipe rails for each channel except, as noted before, in the loading area.  Under the boats there were three rollers – one at the bow and the other two at the back corners.  These rollers when making contact with the pipe rails, kept the boats on track – sort of, as you will read later.  The boats could actually be steered as there was enough space between the rails to allow a driver to turn the boat slightly.  There was a large open water area at the back of the ride where the boats made a large circular turnaround,  then they came back through the rock and rapids area as the later version did.  Ride operators did not enjoy the luxury of the air controlled gates at each load position as the later version used.  Instead, the ride operators had long aluminum poles with a wire cable loop at the end of it.  The boat engines were always going and the operator would hook the loop over the cleat at the bow of the boat as it came into the station, follow it to the first open space, and through shear strength, stop the boat until the guests disembarked and the next riders were safely seated before unhooking the loop and letting the boat go on its way.  As I recall there were underwater gates at the start and finish that would direct the boats alternately to Channel 1 or Channel 2.  The loaders lined up on the dock to catch their boats and bring them to a stop.  It took some strength to hold the boats during the load/unload process and new operators ended up with blistered hands until their hands toughened up.  We felt in good shape with all the physical labor it took to run the ride.  Now the plot thickens—what we found early on was that the guests had no idea how the boats were controlled under the murky water.  Since there was a little steering between the rails, one guest would try to bump their buddy in the next lane.  Of course he couldn’t do it, but steering against the rail slowed the boat down and if it was slowed long enough the next boat caught up to it and jammed the two boats together.  If it was the outside channel we could usually reach it with the poles and pull the boats apart.  However, if it was the inside channel or at the turnaround area, one of us would hand our wallet to another operator and jump into the water and wade out to the boats to separate them.  This was fine on a hot summer day, and of course we would then have to go to Wardrobe to get a dry costume.  This problem became quite common and we got permission to wear our wet costume until it dried out.  If this problem happened back in the turnaround area, it presented another problem.  This area was the deepest part of the ride.  On me the water came up to my armpits.  Now imagine a child in a boat that has suddenly stopped back there and then see a man jump into the water and approach them with only his head and shoulders visible.  Usually our first job was to reassure the children that everything was all right and then go about separating the boats..  This problem seemed to get worse as the summer progressed.  One of the operators was also a life guard.  He asked if he could wear his swim trunks and stay in the water in that back area.  He did that for several days until one day a water maintenance worker poured a water treatment chemical into the water and the life guard broke out with a rash.  That ended us having an operator in the water all the time.  Needless to say, the W.E.D. designers went to work to redesign the ride with a guide system similar to the one used in “It’s A Small World” attraction.  At that point the guests could no longer steer their boats.  Also the loading area was changed to two separate channels with air operated gates that held the boats during load/unload.  This was much better for the ride operators, although the guests had enjoyed the ability to steer the boats in a limited way.  The loading area and part of the channel layout is still visible across from the Matterhorn Bobsleds. 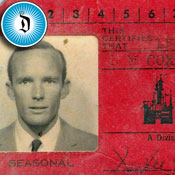 Cox Pilot worked at the Flight Circle in Tomorrowland and has many great memories about his time at Disneyland. Look for his other columns, sprinkled throughout the Disneyland pages on my site. Cox Pilot makes another great contribution with this information about The Motor Boat Cruise attraction:

The boats worked just like the Autopia. They were confined to a course by an underwater system that allowed the helms person to drive the boat in a limited way. The water could not be allowed to rise too high because then the boats would float over the confinement system. The main problem with the boats is that the engines were unreliable. They tended to over-rev because of the prop drive system, and over-heat because of lack of cooling.